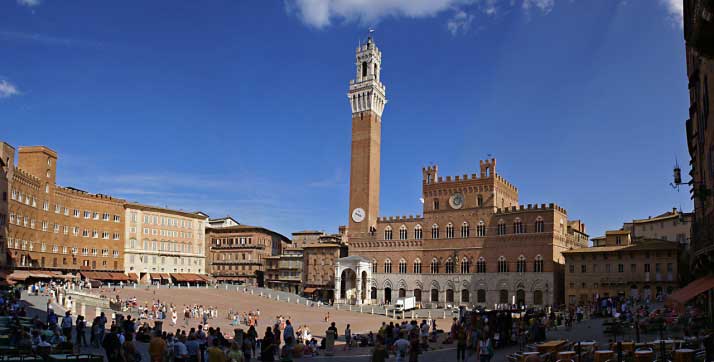 Siena (18 km): medieval city but with the Gothic features of the Duomo; in addition to the well-known shell shaped Piazza del Campo where the Palio takes place (on 2th July and on 16th August). You cannot miss the Palazzo Pubblico with its 102m high Torre del Mangia, from which you can have a beautiful view; the museum of Santa Maria della Scala, The Civic Museum , the San Domenico’s church , the San Francesco’s ,the Santa Maria dei Servi’s and many others beauties…
Florence 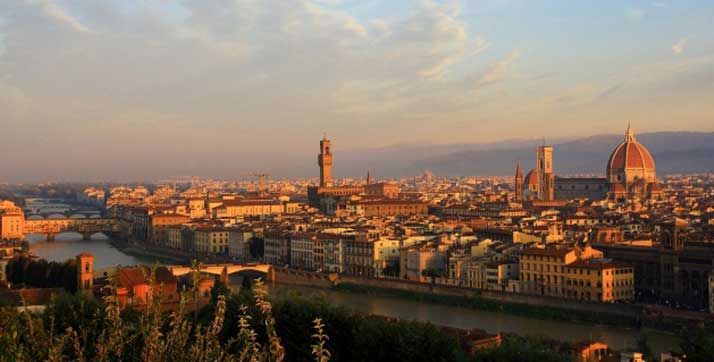 Florence (60km): city of a thousand beauties, famous all around world for the Duomo and The Brunelleschi’s Cupola , the Giotto’s bell tower, the Battistero, Piazza della Signoria, Palazzo Vecchio, the Uffizi Gallery with its priceless works, Ponte Vecchio, Palazzo Pitti, and the Boboli’s Garden, the Santa Croce’s church and the Basilica di San Miniato al Monte. And this is only the beginning …. If you don’t known how to get around these wonders, you can be guided by Dott.ssa Viola Andrea Duse Masin, nice and alternative tourist guide enabled for Florence and nearby! For information :339/3579570
Maremma 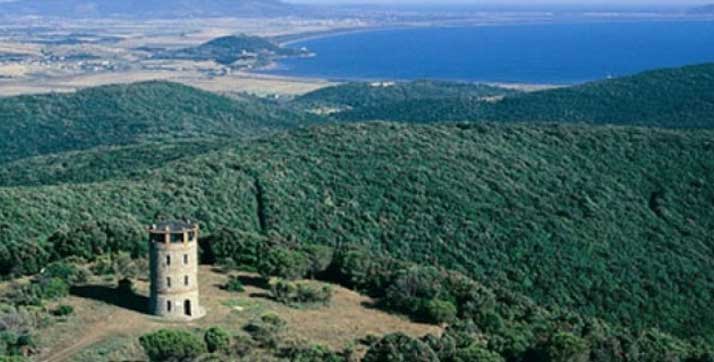 Maremma (about 65 km): the Maremma occupies the southeast of Tuscany and it is characterized by a great variety of landscapes. The Natural Park of Maremma with its extension of 9.000 km is formed by a hills range which goes down to the see with sandy beaches and cliffs, and it is surrounded by swamp, pine grove, cultivated field, and pastures. Second regional park opened in Italy contains 5 integral reserves and offers many possibility: walking, biking, kayaking , and horse or donkey trekking itineraries ,visits to the aquarium of Talomone, guided tours to learn more about the nature and much more …
The Vie Etrusche 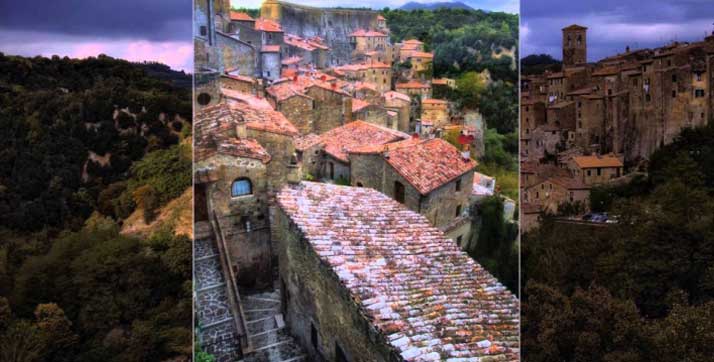 Fascinating itineraries between Pitigliano ,Siranoe Sovrana, in order to discover the so-called Vie Cave, ancient streets dug out of tufa by the Etruscans and used in later times. The itineraries, going through woods and crops, reach particularly beautiful necropolis.
Amiata Mountain 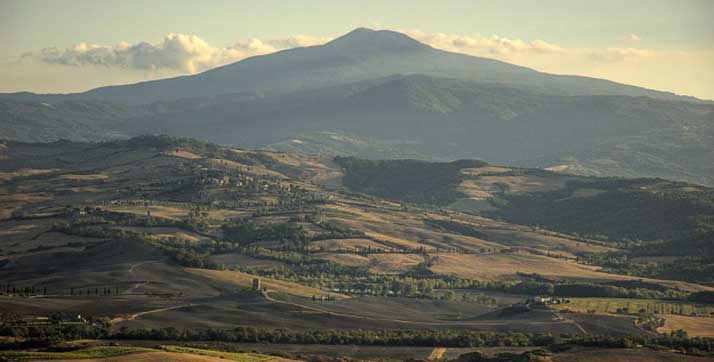 Amiata Mountain (about 60km): volcanic mountain between the provinces of Siena and Grosseto, dominates with its 1738 miters high surrounding valleys. The Wildlife Amiata’s Park is located in the nature reserve of the Labbroe Mountain consists of a series of routes and nature trails created for didactic and educational purposes. But Amiata means also Wine Street, food and wine festivals, the biggest beech forest in Europe , skiing , spa and water (Santa Fiora e Vivo d’Orcia).
Pisa 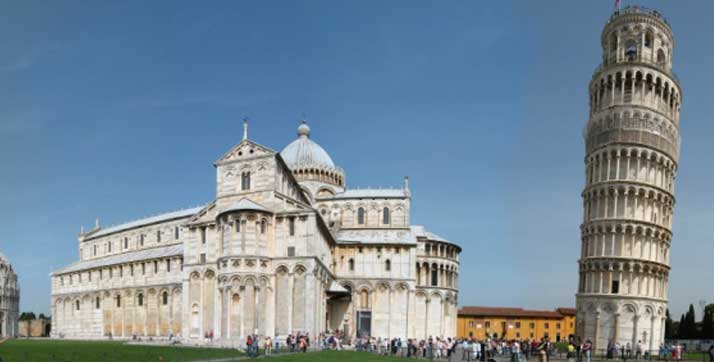 Pisa (about 110 km): ancient maritime city renowned worldwide for its Leaning Tower and the Piazza dei Miracoli where you can find the most famous monuments.
Crete senesi... 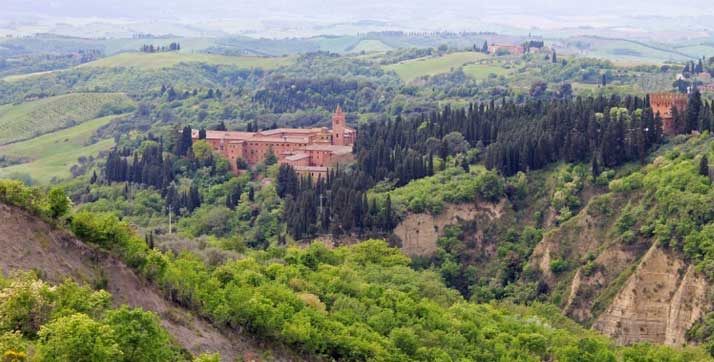 Crete Senesi and Abbazia of Monte Oliveto Maggiore : here you are abele to find a real magic… Walking between sun lowers, poppies, and wheat, enjoying beautiful sunsets and the shadows of the hills. ¬¬¬ A feature of this place is a fascinating worship place; the Abbazia Of Monte Oliveto Maggiore.
The Chianti 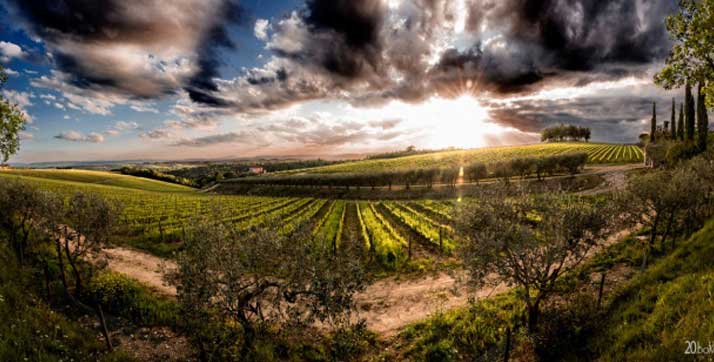 Between Firenze and Siena, there is the beautiful hilly area famous worldwide for its vineyards, fields, villages, scattered houses, and landscapes. You can start from places like Gaiole, Raddae, or Castellina in Chianti… you can visit some of the many castles in the area (like Brolio’s Castl ) and the large farms owned by famous wine and extra virgin olive oil producers, who will let you taste their products.
San Galgano e Massa Marittima 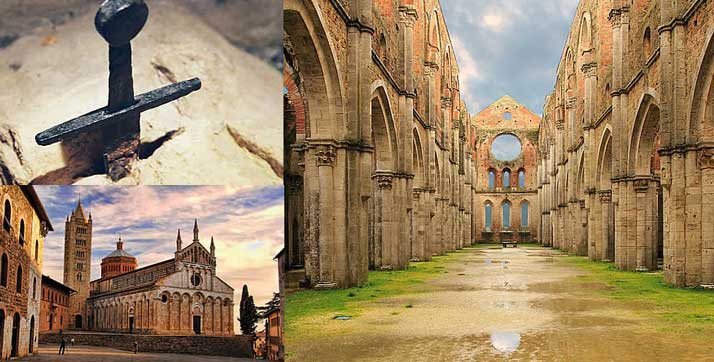 the Basilica di Montesiepi and the roofless great abbey of San Galgano are some of the most suggestive places in the area. In the abbey it is located Galgano’s sword stuck in the stone, which witnesses his will to leave the life of fighter knight for the spiritual one. The sword stuck in the stone takes us back to King Artur…. Massa Marittima, already inhabited in Etruscan times, became a roman center and was an important episcopal center in IX century. Because of its rich copper and silver miners it was contended between Pisa and Siena. The historical and artistic center is the square dedicated to Giuseppe Garibaldi, with its beautiful Duomo.
Medieval Itinerary 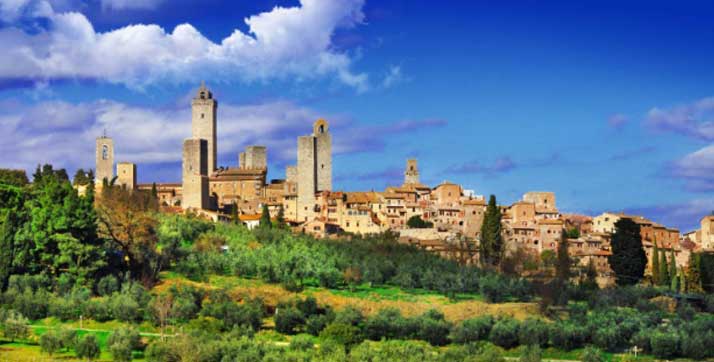 the Monteriggioni’s Castle was built on a hill in the early 1200 by the Siena’s citizens as an outpost to control the valleys in Florence direction, old rival. Then there is San Gimignano , towers’ city and UNESCO heritage, where the historical center has remained essentially intact and it is a valuable example of the urban organization of communal age. Despite having Etruscan origins San Giminniano’s development occurred between IX and XII century, when the pilgrims heading to Rome through the Francigena route contributed to the welfare of the city. During the maximum splendor moment there were 72 towers, of which only tow have survived until today. You cannot miss the Collegiata of S. Maria Assunta, the Duomo, the Church and the square of Sant’Agostino, the Torre Grossa The Palazzo del Popolo and the Cisterna’s square. All of this walking between tower houses of the old aristocracy that overlook the squares and main streets.
Volterra 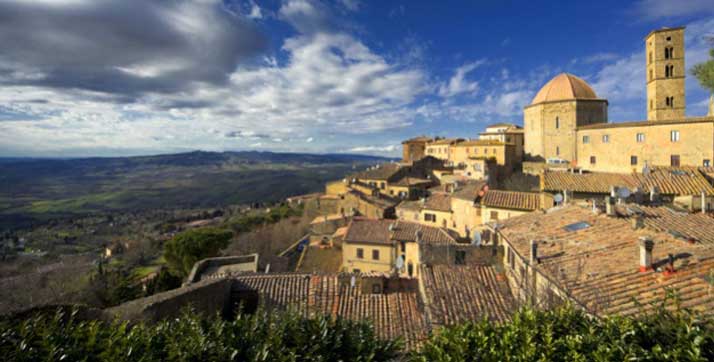 Volterra (60km): roman-etruscan town is mostly famous for its overlooking Fortress Medicea and for the alabaster working. The city center is all made from a gray stone called panchina , and it is a intact example of communal town. The visit start is in Piazza Priori, the heart of the city, where you can see illustrious buildings like the Palazzo Vescovile, the Palazzo Pretorio and the Palazzo of Priori. In the surrounding streets you’ll see tower-houses and the Duomo, the Battistero and the Civic Museum. Behind this last one, near the walls , there is the roman part with the amphitheater; the etruscan remains can be found in the archaeological park and in the Guarnacci Etruscan Museum.
Seaside 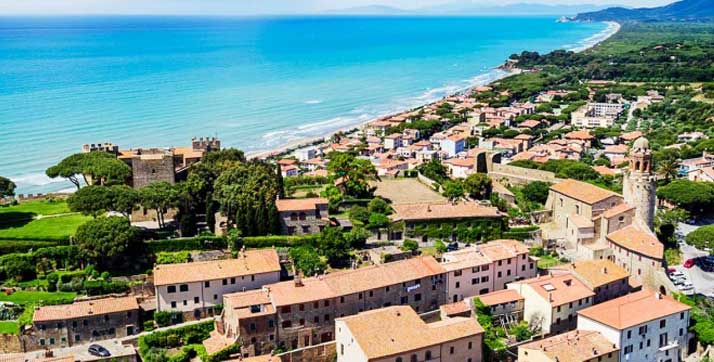 Seaside (from 75 to 110 km): from sandy beaches to rocky coves, there is something for everyone, for who likes beach clubs well equipped or for those who prefers free and wild beaches. The Argentario is well-known for its beautiful sea and for the wealth of unknown coves because of the Spanish testimonies and the nightlife. Here the typical smells of the Mediterranean scrub and the marine beauty are perfectly mixed. From Porto Santo Stefano you can have magnificent excursions to Giglio’s island (about 1h by boat), and frome here to Giannutri and Montecristo. The Cpalbio’s beaches are really big, are close to the scrub, characterized by dark sand because of Iron and with few beach clubs.
Val d’Orcia 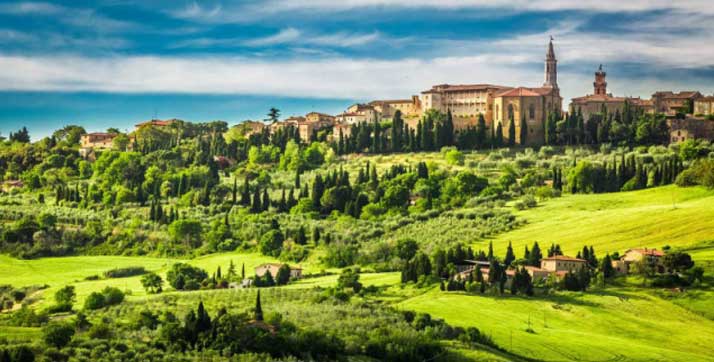 Val d’Orcia : Pienza, it’s history is linked with the Piccolomini , it is a place rich in art treasures and since 1996 it has entered into the UNESCO World Heritage, famous also for its fine cheeses. San Quirico d’Orcia and Bagno Vignoni are known as healthy resort thanks to the thermal waters. The famous “square of water” with the porch makes the unusual and fascinating atmosphere….
Montalcino 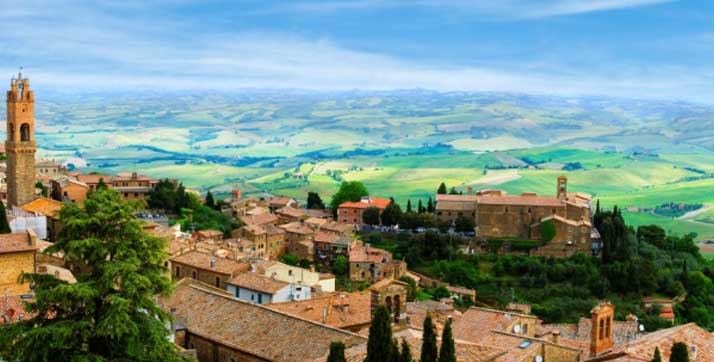 Montalcino (50km): it is an important center in the Etruscan and roman age, well-known all around the world for the fine wine production , like the Brunello; Sant’Antonio (60 km) is a place of worship of the roman period and inhabited by Benedictine monks. And it has three semicircular chapels which testify the French influence.

Horse riding: the Tegoni’s farm (45 km) offers custom packages, with a program according to your needs, from horse riding to good tastings in the farm. Visit of the farm by jeep and visit to the piggery . For information : Andrea Avetta 388186054

Mountain biking excursions : not only you can cross the fantastic streets in the countryside of Siena, but also you can take a great adventure in the famous Eroica or explore the Francigena route.

walks along the paths and into the woods surrounding the property. The owners , who live in the farm house , are available for their guests for any further information and advice.